10 things you’ll notice when you come to Ireland 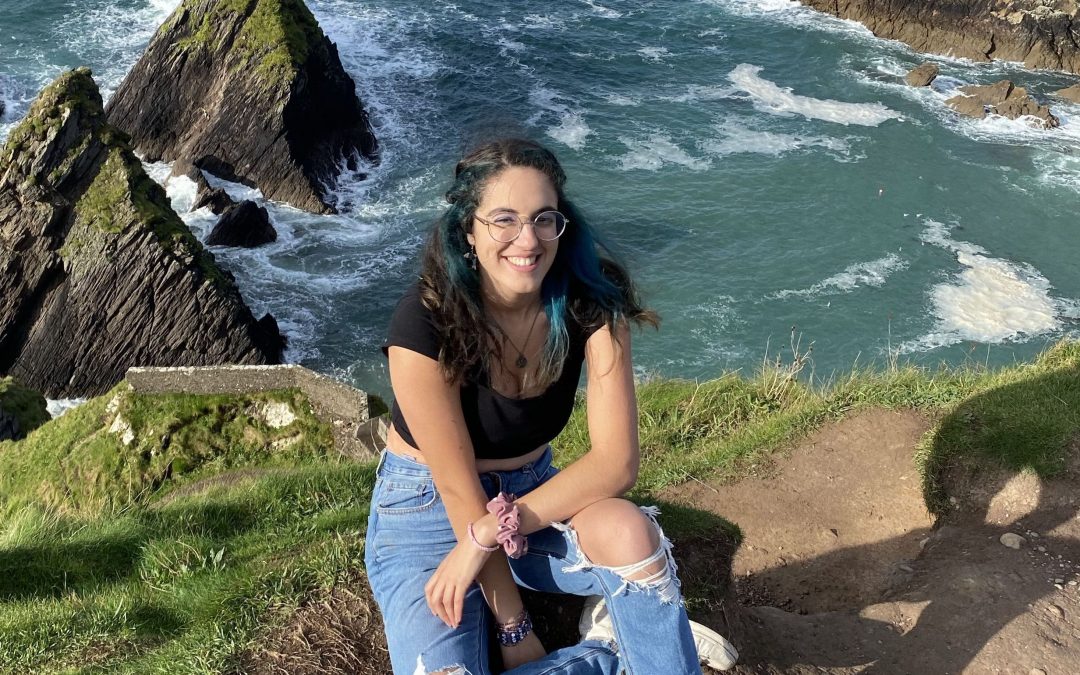 In her first blog, Student Ambassador, Grace Patterson from Canada writes about ten things that stood out to her when she stepped off the plane in Ireland.

As the plane hit the ground, I lay back in my seat, eyes closed, heart pounding. I had just landed in Ireland — the place I was to call home for the next year. I made my way down the aisle, off the plane, and stepped onto Irish soil for the first time. Since that first step, it has been a whirlwind of nerves, excitement, and big changes. Here are ten of the first things I noticed, from the time I stepped foot into Dublin airport until now! Hopefully, some of these will help other newcomers to Ireland know what to expect! 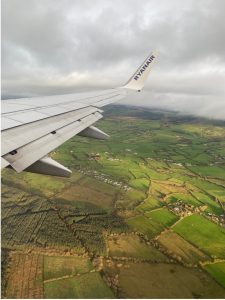 Flying over the fields of Ireland (photo: Grace) 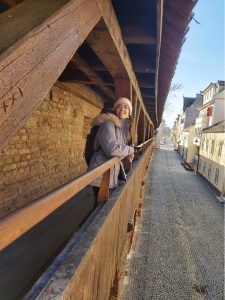 Looking out onto the streets on a trip to Sibiu, Romania (photo: Grace)

2. It was also raining… (Ha-ha, what an Irish stereotype, I thought to myself.) Little did I know this wasn’t just a stereotype, but an everyday occurrence along with strong winds, and spontaneous hail. (Buy a raincoat as soon as you get here.)

3.  My flying buddy (and future roommate, I love you Keara!) made our way to the bus ticket counter. We were about two hours early, and the worker there told us to ‘go grab a tea’. This is a common saying here. Instead of just a break, it’s a ‘tea break’. (My tea-loving self will take any offer of more tea.) 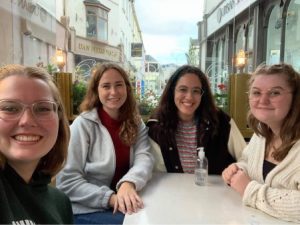 Grace and her roommates (Lauren, Keara and Jenny)

4.  Soon we were loaded onto the bus and jetted off across the country to Tralee. Despite how much I wanted to sleep, I couldn’t pass up the opportunity to peer at my new home. I was shocked at the amount of green (and cows) everywhere. In my Irish travels since, it’s become a common occurrence. You will be looking across a clifftop of lush green grass, the ruins of an ancient castle, and to your left—a field of cows. 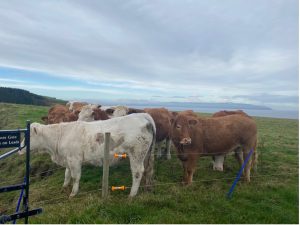 Cows on the coast at the Giant’s Causeway (photo: Grace)

5.  After four hours of driving past the greenest fields, the cutest towns, and by a casual castle…we arrived in Tralee. We got off the bus and were greeted by our apartment manager, who showed us to our rooms, all the while talking fast in his lovely Irish accent and using a string of words I didn’t understand. The Irish love their slang. Here’s a shortlist:

“Are you ok?” – a lot of baristas will ask you this when you order! It is a way of getting someone’s attention, essentially “How can I help you?”

6.  My roommates and I settled in pretty quickly and then experienced our first taste of an Irish grocery store. A few things to know when grocery shopping in Ireland:

Get Tayto (Potato chips; but they are called crisps here! Chips here are fries!)

Cheese is super cheap (I got brie for €1)

7.  As the days went on, I began to fall in love with Ireland. One of the highlights was seeing the ocean. About a 45-minute-walk from Tralee is a town called Blennerville where you catch a glimpse of the endless ocean, and an old windmill. (Pro tip: Go at sunset, the view is gorgeous). A few weeks in, some friends and I also hopped on a bus and up the Dingle Peninsula. The bus dropped us off in a remote area with cows on one side, a cliff and the sea on the other. We hiked for an hour and then came upon a tea house on the edge of the cliff with amazing views. It was surreal. 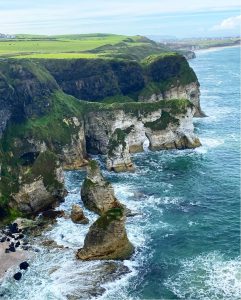 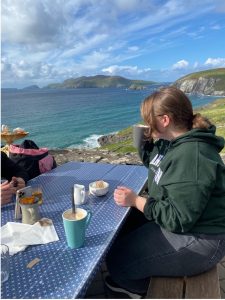 Tea with a view! (photo: Grace)

8.  As I became savvier in navigating my way as a pedestrian, I had to adjust my thinking. Beware—Irish people drive on the left side of the road and have roundabouts all over the place, so double-check both ways before you cross the street!

9.  I also delved right into my studies…and noticed a few things. The way school works here is very different—most classes only have one or two assignments or exams worth 50% each or 100% in total!

10.  Finally, Christmas is a huge deal in Tralee. The first weekend of December my roommates and I went down to the town centre, and with hot chocolate in hand, counted down from ten as they lit up the huge Christmas tree and surrounding lights. It was spectacular. Kind of like living on the set of a Christmas movie. It’s hard being away from home during Christmastime, but the vibe here is so homey and cosy, it helps a lot. 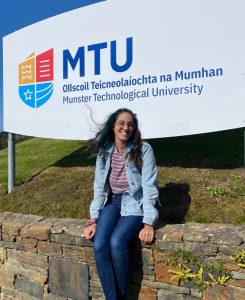 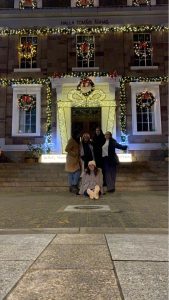 Despite all the differences, the culture shock is slowly wearing off, and I’m quickly falling in deep, deep love with this beautiful land that is the Emerald Isle. I promise you will too!

Grace is studying Early Childhood Education and Care at MTU.