Getting to grips with the accent, the slang and the names

Malaysian ambassador and Electronic Engineering student Ian Chiam tells us about getting to grips with the Irish.

When I first moved to Ireland, one of the most difficult things for me to get used to was the Irish accent and the slang. Much like every other country, there are variants of the Irish accent as well as the slang scattered around the country. Most of the time, students who come to Ireland already have a fair knowledge of English. Then they arrive and the reality of the country they’ve chosen hits them — The accent is so difficult to interpret, that any new person coming into Ireland feels like they have to re-learn English.

The Dublin ‘U’ sound is one the most obvious accent difference. You can be at a bus stop and hear the bus driver saying ‘BOS stop’ rather than ‘bus’. In Ireland and particularly in Dublin, people pronounce the U in a very particular way — They pronounce the ‘U’ with an O sound. Other examples include, ‘BOT’ and ‘POB’ which translate to ‘But’ and ‘Pub’.

The ‘R’ sound can also be mystifying. I was at pub taking someone’s number down but when they were spelling out their name, I got really confused. Irish people pronounce the letter ‘R’ with a strong ‘OR’ sound from the top of their mouth. 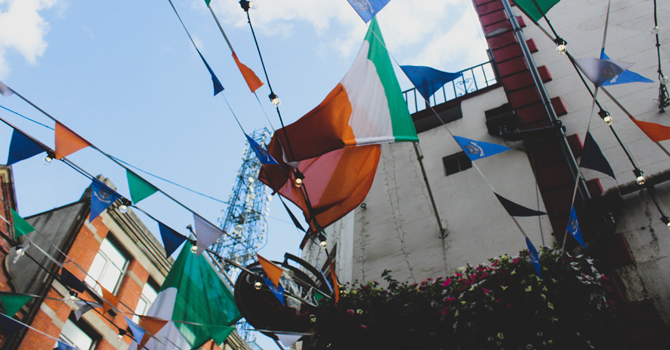 During the first few days in the country, it feels like everyone cares about your well-being. For example, you can be at a supermarket buying groceries when the shop assistant asks you, ‘are you okay?’ Next thing the bartender asks, ‘how are you?’ and you reply with ‘I’m fine, thank you and you?’ This will keep happening everywhere you go. From a cashier to the bus conductor, everyone in the country cares about you. There’s no doubt that Ireland is one the friendliest countries in the world, so be sure to have a little chat with the locals. They all love a friendly conversation.

The real way of asking ‘how are you’ or ‘what’s going on’ is by saying ‘what’s the craic?’ — But what is ‘the craic’? Is it something physical or metaphorical? And how should one answer this million dollar-question in the most Irish way possible? These were the questions that I initially thought about when I first arrived here. The correct answer is ‘Grand and yourself?’ meaning ‘Fine thanks and you?’

Or if they mean ‘what’s happening?’, then you can answer with ‘zero craic’ or ‘no craic’ meaning that nothing is happening. Other than that, if you want to imply that there are a lot of interesting things happening, then you might say; ‘the craic is ninety’ or ‘the craic is mighty’.

You can never take an Irish person literally. For example, ‘come here’, pronounced ‘come ‘ere’ does not mean you should go and move to where they are. They just mean ‘listen’. Funnily enough, I spent a few weeks going over to someone’s desk until I finally learnt the true meaning of this word.

I feel like all Malaysians would fall into this trap and I was also guilty of it; I spent a good few months not knowing what the time was, when I was told by an Irish person. When we’re in Malaysia, we would refer to time as it is, for example 5:30pm or 10:50am. We read it as it looks on the display. But in Ireland, it’s pronounced ‘half 5’ and ‘10 to 11’. Well, I was mentally prepared to listen to accents but I wasn’t mentally prepared to do arithmetic math on a daily basis.

Ireland’s first language is actually Irish, which is also known as Gaelic, but you will rarely meet people who speak Irish fluently even though it was compulsory to learn in school. But of course, you can find street signs and roads with Gaelic words below the English ones. While you might not hear a lot of Irish people speaking Irish. It is quite common to hear different types of Irish accents, while you speak to people around the country.

After being in Ireland for almost four years now, I am almost certain that I would want to give my child an Irish name. I find the Irish names extremely unique and intriguing, because it is spelt one way but pronounced in another way.

For example, Siobhan, Caoimhe, Eoin, Aoife, Niamh — the list goes on. Try pronouncing these, then see how many you can get right because when I first came, I got it all wrong. It’s actually pronounced, shi-VAWN, kwee-VAH, Owen, eee-FA and NeeV.

There is also a way of referring to someone without saying their name. As hilarious as this sounds, everyone in conversation seems to know who ‘your man’ is, apart from the foreigners in the group that keep thinking it somehow relates to them. Just as a rough translation, ‘your man’ actually just means ‘that guy’ or ‘that girl’.

The tip of the iceberg

This is just the tip of the iceberg as this topic can lead to a very in-depth discussion but nonetheless, I hope that this will help anyone interested in coming to Ireland to understand Irish people and maybe learn an Irish accent.