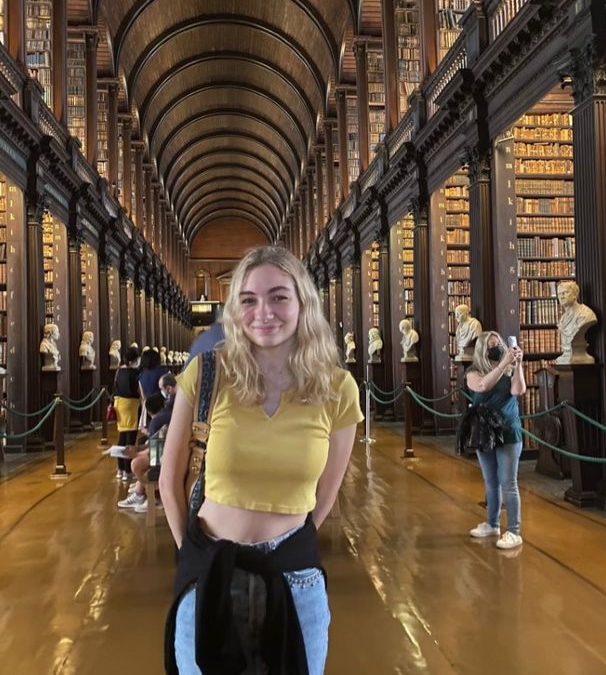 For many of our Student Ambassadors, when they come to study in Ireland it’s their first time here but, for Daisy Gambles, Ireland is home. Living in Thailand, Daisy rarely makes it to Ireland so she’s decided to spend the next four years here instead! 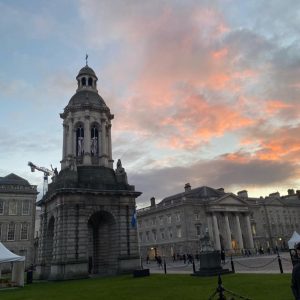 As I stood by the campanile in awe, gazing up while my Mum took photos from the front gate, I had to pinch myself multiple times to make sure this was real. I was in Ireland! I was in Dublin! At Trinity College Dublin! Though I hadn’t been home to Ireland in two years, it felt just as welcoming and warm as it had when I had been there last (metaphorically of course; the definition of an Irish summer differs greatly from the humidity that I was used to in Thailand).

When I first arrived in Dublin, my experience couldn’t have been any more exciting yet stress-free. I checked into the hotel my parents and I were staying at, and once we had put our luggage in our room, we walked around the city. We first stopped at Goldsmith Hall to collect my T-Card (Trinity College campus card), and then went to see the highly revered Book of Kells. Once inside, we stayed for ages, admiring the different colours and textures in this piece of history, and then eventually left through the campus exit.

Actually being on campus was a surreal experience – I had seen photos and countless videos of Trinity, spent hours watching Normal People in preparation for where I would be walking to and from class, but this was nothing in comparison to standing there, breathing in the warm August air. I felt like a small child at Christmas; I had to be dragged along by my parents, as I looked from statue to statue, building to building. Soon, I would familiarise myself with these grounds, engage with the different societies, know my way around without having to constantly consult my Trinity Live Building Finder app. I knew all the official orientation and guidance would come during Freshers’ Week, but for now, I was entranced by the sheer beauty of the college and the fact that I would be attending classes here for the next four years. 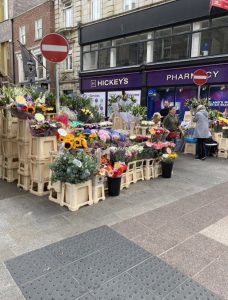 The streets of Dublin (photo: Daisy)

Freshers’ Week was a frenzied time, to say the least. Between general orientation for first years and an incredible assortment of activities ranging from petting zoos to musical theatre karaoke, I found myself getting so fit due to all the running around campus. As hectic as Freshers’ Week was, that was the week where I found myself making friends in and outside of my course. Through the drama society, we engaged in different themed events such as Drag Night, Murder Mystery, Prom etc. These events brought my classmates and I closer together, especially as everyone in the society was so friendly and welcoming. Freshers’ Week allowed me to sign up for different societies, try new activities and experiences, and make new friends all before classes had even started! 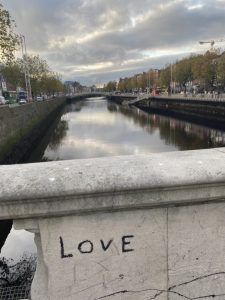 Although I was nervous about classes starting, I’ve loved them so far. Because I’m a single honours drama student, I study one subject – this means all my classes are geared towards that overarching theme, allowing me to study what I really love! Another advantage of studying drama is that most of my classes have been in person due to the practical and hands-on nature of my course; this was something I really missed about drama and was very excited to be back. Now the academic side of college is very full-on; even though my assessments have been a mix of practical and essay-based work, they’ve been spaced quite closely together, meaning I’ve had to be very organised in the lead up to assessment weeks.

Despite the slightly awkward transition phase from secondary school to university student, my first impression of my college has been great so far. I’ve made amazing friends, joined some very cool societies, and I’ve been so excited coming into classes. I’ve had a really fun first term at Trinity, and I can’t wait to go back after the break!