Our Nigerian ambassador and student of Biomedical Science at TU Dublin, Ruth Ikenyirimba talks about the topic of racial discrimination in Ireland and if it should be a concern for prospective students.

One thing most people from ethnic backgrounds worry about when they move or travel to a new country is whether or not they will experience discrimination. If you’re sitting there considering studying in Ireland and your main question is, do I have to be worried about racial discrimination? I can’t give you a definitive answer to that, but if you keep reading, I will provide more insight on this topic based on my personal experience.

Ireland has had a culture of acceptance in the last decade or two, and lots of different nationalities have integrated quite well. My point of view would be concerning Dublin as this is where I live and study. I know areas like Cork or Limerick are much less culturally diverse, so, this blog may not apply to them. Two out of every ten people you walk past on O’Connell Street in Dublin city centre might be Asian, one out of ten could be Middle-Eastern, one out of ten of African descent, one out of ten being nationals of other European countries and only about five out of ten will be Irish. These statistics are purely self-generated, and I would advise you not to quote me on them, but I do feel these are rough figures that will describe the visible cultural diversity of Dublin. You might not understand how crazy this is, but barely two decades ago, there were hardly any foreigners. In such a short time, Ireland has come a long way with tourism and immigration. So how are the Irish handling this? 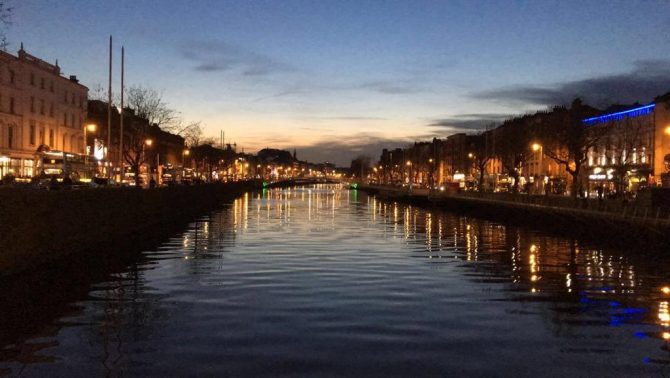 The River Liffey in Dublin

During my first two years in Ireland, I had never encountered one ounce of racism — either the passive-aggressive type or the right-in-your-face kind. Some might say that this may be due to my oblivious nature, but I’m purely speaking from personal experience. The only occasion I can think of was an encounter with a few male Italians, but they were not Irish. I do believe that the Irish people are handling immigration well. Most people here receive foreigners with arms wide open — they do this while retaining and teaching their own culture. Irish people are genuinely curious about other cultures and love to learn about them. This explains why Asian restaurants and cuisine are so successful in Dublin, why hip-hop is a large part of Irish youth life and why the Irish love a curry. I like to think that immigration brings a little more flavour to the lives of the Irish, and it becomes a win-win situation for both Irish citizens and immigrants hoping for a better experience.

Irish people tend to keep their opinions to themselves and are very polite. If safety and acceptance are what you are worried about when contemplating coming to Ireland, I believe you have little to worry about. I’ve been living in Dublin for three years now, and I have felt both safe and accepted. Most people are lovely and only want to know if your braids are real or not. They also gush at our colour and how ‘exotic’ it is! Joking aside, I don’t believe I could have made a better decision on where to study. Most European countries are not as accepting to people who are different from them, and people face discrimination daily. Remember too that higher rates of international student fees here only applies to non-EU residents and Ireland has a lower rate compared to the UK. European countries offering a lower fee rate than Ireland either don’t have English as their primary language or have higher rates of discrimination against immigrants.

Discrimination will always exist everywhere you go, no matter what your skin colour, gender or sexual preference but Ireland has found a way to tackle those problems by addressing gender equality and accepting members of the LGBTQ+ society as can be seen during Pride week where thousands gather to show support.

If you’re sitting there still worried about integration and acceptance. Don’t. Ireland is the place to be.